A comprehensive exhibition on Anton Pieck (1895-1987) in De Hallen Haarlem. Five rooms were filled with around 300 original works on loan from many different lenders: drawings and watercolours, oil paintings, drafts and book illustrations. The exhibition showed Pieck as a full-blooded romantic. His oeuvre bears witness to a longing for better times which he found mainly in the past. He created a unique pastime for young and old alike with his very successful fairytale wood at the Efteling: numerous designs for this have been included in the exhibition. Pieck’s work displays great craftsmanship, but also a great deal of imagination and a particular sense of humour.

The ‘Anton Pieck’ exhibition was part of the ‘De Hallen Haarlem Summer Series’ aimed at a broad audience, and follows on from the successful ‘Isaac Israels aan Zee’ in 2007.

The exhibition focuses on the romantic in Pieck. The countryside, so venerated by 19th-century romantic artists, was still a gripping subject for Pieck. He expressed this particularly in his graphic artwork, with depictions of a wide range of plants and animals, and landscape scenes which were reminders of works from the Golden Age. Pieck’s love for and knowledge of the countryside are expressed in innumerable details in his illustrative work. It was only through his continuing study of nature and decades of model study that he was able to draw these often complex pictures.

Pieck’s nostalgia can be recognised in his serious illustrations for a de luxe edition of romantic songs by Schubert (1935). Pieck also provided illustrations for Vondel’s ‘Gijsbreght van Aemstel’ in 1937. These show his interest in the history of Amsterdam, an interest that was later expressed more emphatically in the many drawings and watercolours which Pieck would dedicate to the attractive old city centre of Amsterdam. A series of plates for a booklet about the work of the Salvation Army in the inner city is a highlight of these; they can be seen at the exhibition. However, the nostalgic Pieck also recorded the old urban beauty of many other Dutch cities. A number of the celebrated, historical ‘Baker’s Plates’, made for Calvé, are also present at the exhibition.
His romantic bent also gave Pieck cause to travel to countless countries, partly to acquire inspiration for his illustrative work. For example, he packed his drawing and painting equipment and spent weeks in Morocco, where many dozens of drawings and watercolours were produced. He later made use of this work when illustrating the tales of the Arabian Nights.
Many drawings and sketches were produced in Britain, the country of Pieck’s favourite author Charles Dickens, whose ‘A Christmas Carol’ he was to illustrate. Pieck also recorded many picturesque scenes in Belgium, Italy, Switzerland and elsewhere.

Pieck’s love for the fairytale world is demonstrated in a presentation on the Efteling amusement park (Kaatsheuvel, N-B), for which Pieck created over 1500 draft drawings in the 1952-1974 period. In addition, original illustrations are shown for books of fairytales, myths and other imaginative tales, like the ‘Grimm Tales’ chronicled in the 19th century, the ‘Tales of A Thousand and One Nights’ collection and ‘The Wonderful Adventures of Nils’ by Selma Lagerlöf.
The humour and geniality with which Pieck was able to depict the everyday lives of people from all strata of society is reminiscent of the paintings of old masters like the 16th-century Pieter Brueghel and the romantic/Biedermeier artist Carl Spitzweg, painters whom Pieck held in great admiration. Pieck also clearly found his examples in such so-called ‘higher’ art: the winter-scene painter Hendrik Avercamp and the Japanese woodcut master Hokusai were equally important sources of inspiration. 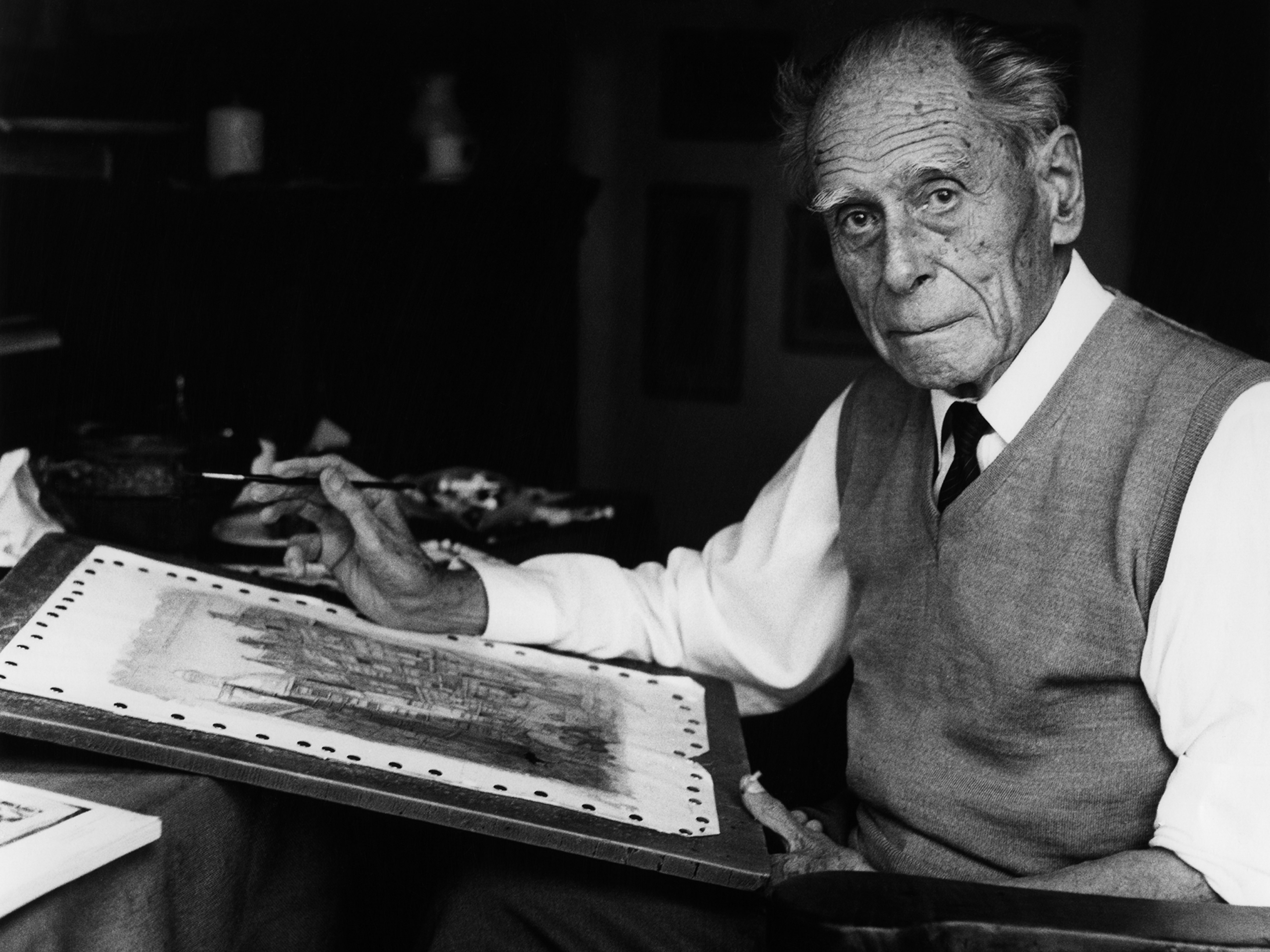 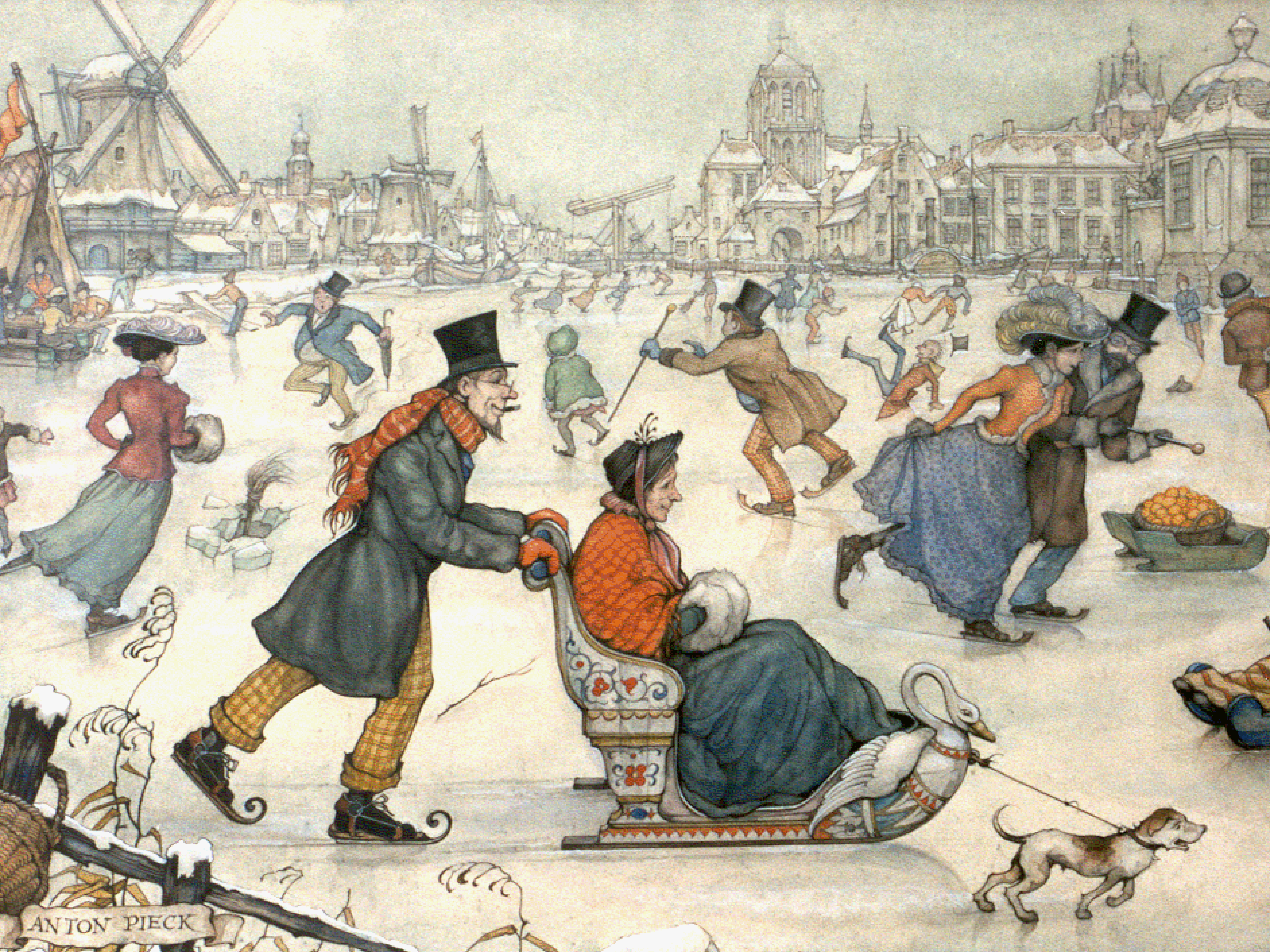 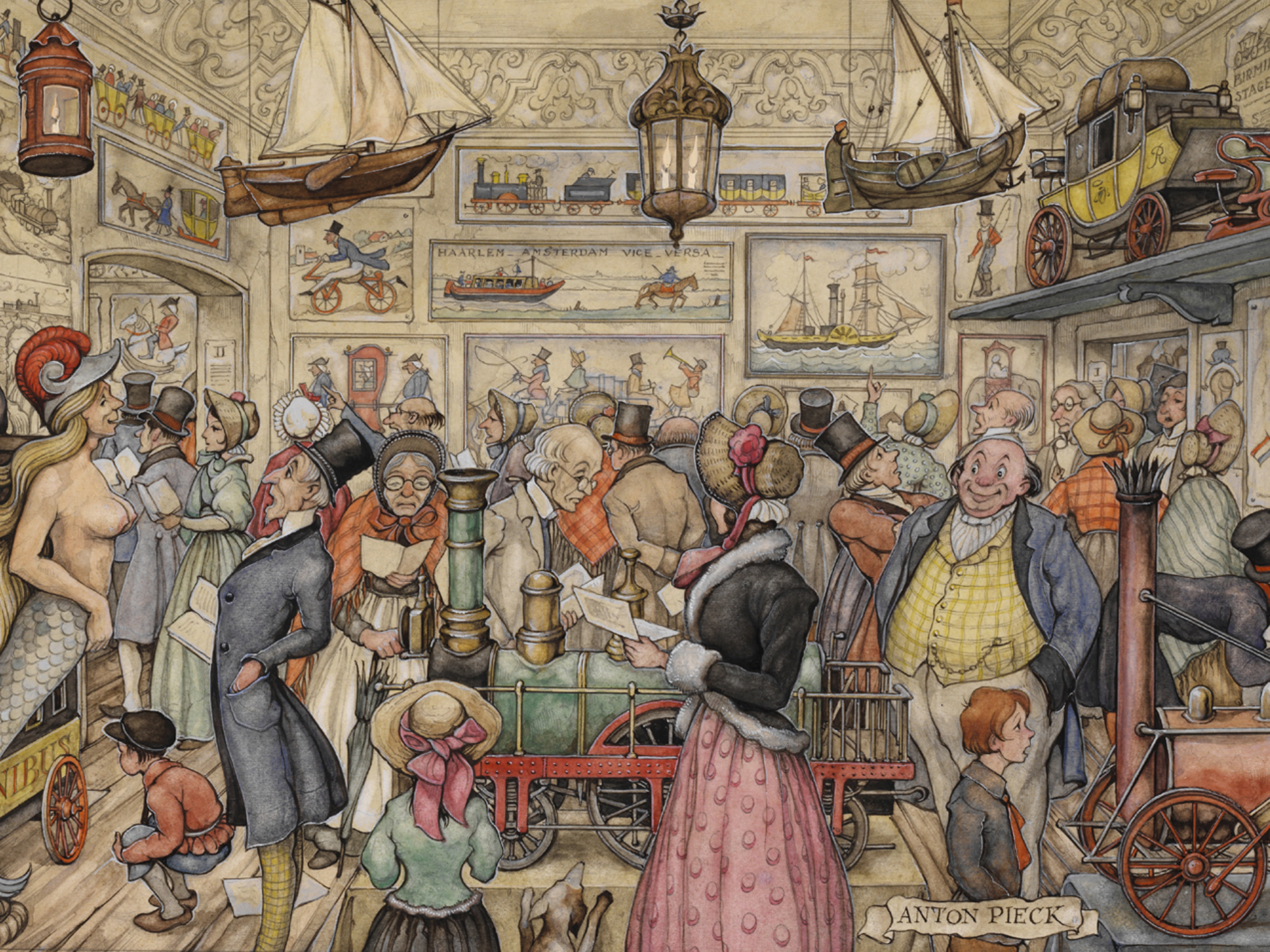