‘En route’ was the title of an exhibition with works from the collection of modern art in the Frans Hals Museum. It showed artworks that were produced by artists on, or as a result of their travels. The works included both paintings and drawings, by Dutch artists, among them Piet Mondriaan, Isaac Israëls, Herman Kruyder and Jan Sluijters.

For centuries artists have sought inspiration outside their studios. For instance, in the 16th and 17th centuries many painters went to Italy, to draw the classic ruins and other scenes there. But in the modern 20th century too artists frequently made use of motifs that they encountered ‘en route’, both in their own country and in foreign lands.

During his long life the Hague painter Isaac Israëls travelled to Paris, London and Indonesia, and made many sketches and paintings there. At the request of a candle factory in Gouda Jan Toorop made a series of lithographs of the factory workers at their jobs. In his early career Piet Mondriaan found many motifs in the landscape around Amsterdam, the city where he studied at the Rijksacademie. Leo Gestel went to Mallorca, where he found inspiration in the Mediterranean environment. Jan Sluijters said of his travels, ‘It was actually in foreign places […] that I began to seriously reflect on that mysterious question of beauty.’

For these and many other artists whose work appeared in the exhibition – George Breitner, M.C. Escher, Otto B. de Kat, Corneille, Sjoerd Buisman, Fons Brasser and more. It proved once again how valuable and inspirational explorations outside the atelier can be. 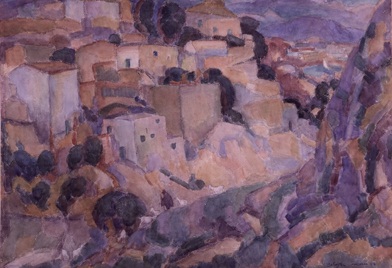