Jonathan Meese (Tokio, 1970)  is above all well known for his generously dimensioned installations, assembled from paintings, drawings, collages, objects, photographs, posters, illustrations from magazines and texts displayed on the wall. They give the hallucinatory appearance of a maze, in which the most bizarre fantasies are brought to life and the most unlikely personalities and ideas are brought together.

You step into an underworld that is reminiscent of Hieronymus Bosch, in which the dark shadows of Nero, Napoleon, Wagner, Nietzsche, Ezra Pound, Rasputin, Rainer Werner Fassbinder, Klaus Kinski and others are brought back to life and moulded into new idols.  In this sinister world, Meese himself is like a chameleon, taking on the form of such grotesque characters as Dr. Cyclops, Captain Danjou, the monk Medardus and Dr. Fu Manchu.  And all of that is interspersed with literary references to the Nibelungen, Edgar Wallace, Beowulf, the Marquis de Sade and Maldoror.

For this exhibition, Jonathan Meese and Jörg Immendorff combined their skills to create a work that brought together their separate surrealist worlds. 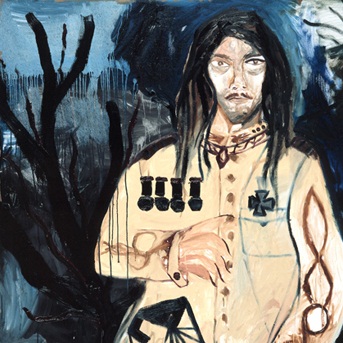