Modernism in the Netherlands

A selection from the collection of Jacobus van Looy

In 1884 the Haarlem painter and author Jacobus van Looy (1855-1930) won the Prix de Rome, an important incentive prize for artists. The prize enabled Van Looy to make a study tour to Italy and Spain. On 18 November, 1886, he crossed to Tangier, in Morocco, by boat from Spain. The exotic, Arabian Nights world in which he became landed raised him to a state of euphoria: ‘The series of impressions is never-ending, the one piles up upon the other,’ he wrote in one of his letters. Particularly the bustle of the Zocco, a small market in Tangier with snake charmers, story tellers and the many pack mules made an overwhelming impression on him. ‘A tumult, an anthill, one doesn’t know where to look … it was at once a feast of lively and colourful trade.’

Van Looy only stayed in Tangier a short time. In 1901/02 he returned to this city with his wife. This time he made countless sketches and drawings. He described the experiences of his trip for Elsevier’s Geïllustreerd Magazine in colourful, impressionistic language. In 1913 the experience was published in book form under the title Reizen.

Many of the drawings from this period have been preserved in the extensive estate of Jacobus van Looy. This collection is now the property of the Jacobus van Looy Foundation, and is administered by the Frans Hals Museum|De Hallen Haarlem. For the exhibition about 40 drawings, pastels and notebooks were selected from this collection. ‘Tangier was one of my most fortunate impressions,’ Van Looy wrote back to The Netherlands in 1886. As an artist, his astonishment at this North African world speaks from each drawing, sketch and quickly pencilled note in the exhibition. 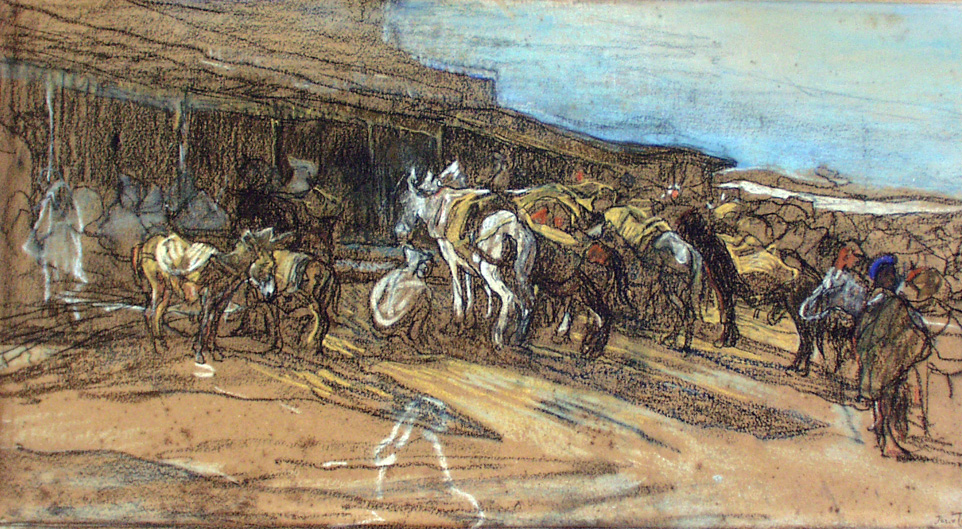