The English artist Tom Hunter (1965) is deeply involved in the lives of his friends, squatters, travellers and artists in a commune in the London borough of Hackney. Hunter has recorded this milieu in series of photographs. His photos are lush with colour and light, and staged down to the smallest details. In this the artist seeks his inspiration in the work of Vermeer and that of the Pre-Raphaelites.

The exhibition in De Hallen comprised thirty photographs. It was the first time that survey of the work of this English photographer had been seen in The Netherlands.

‘I want to let people look at the urban landscape, at my friends and the way they live, and let them see how beautiful it is and that it worth the effort to look again and again’, says Tom Hunter of his work.

In his series Persons Unknown, which the artist started in 1997, he shows you people in the decrepit of the squats in Hackney. In terms of subject, composition, colour and lighting, his photographs are modern versions of paintings by Jan Vermeer. Hunter greatly admires this Delft painter from the Golden Age. His by now famous photograph Woman Reading a Possession Order – awarded the John Kobal Photographic Portrait Prize – is posed as a counterpart to Vermeer’s Girl Reading a Letter at an Open Window (circa 1657). Just as in Vermeer’s painting, a young woman reads a letter in the low sunlight falling through an open window. At first glance Hunter’s photograph seems just as idyllic as Vermeer’s tranquil scene. But the apparent idyll is however cruelly disrupted, because what the woman is reading is not a letter, but a court order to vacate the premises. The newborn baby in the foreground emphasises the hard, merciless reality of her existence.

In 1998, together with a friend, Tom Hunter bought an old double-decker bus and travelled through Europe with it from one music festival to another. There he met travellers, squatters and musicians. During this year he made the series Travellers, photographs of people in their mobile dwellings, sometimes very individual, comfortably decorated, and sometimes stuffed full of things they had picked up, an unimaginable, almost uninhabitable chaos.

Life and Death in Hackney (2000) is a series of photographs of people in the vicinity of Hackney. The photos show a typical urban industrial landscape, with large, abandoned and dilapidated buildings and factories. Between them lie overgrown fields with wild flowers and an occasional tree. In the photograph The Way Home a woman lies on her back in the water under an enormous flowering comfrey.

The composition is based on the painting Ophelia, by John Everett Millais, from 1851/52 (Tate Britain, London), an allegory on the passion for life and death. But it is more than that: a girlfriend of Tom Hunter’s, who lives on a barge, walks back to her boat at night drunk and falls in the water. When she wakes up, she is still laying in the water, her eyes staring into the bright moon, giving her the feeling that fate is smiling upon her. 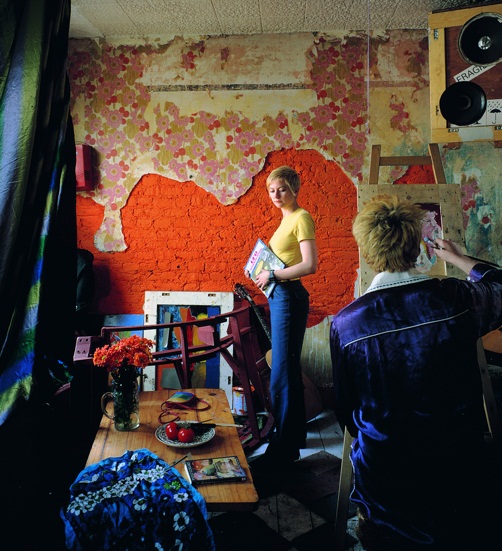