Works from the Museum collection from the period 1900-1940

During the summer months the exhibition Modernism in The Netherlands was to be seen in De Hallen. Artworks from the museum’s own collection, some of which had not been exhibited for many years, provide a colourful and multifaceted overview of Dutch art from the period 1900 – 1940. The great diversity in styles from this era was demonstrated by paintings by Jan Sluijters, Leo Gestel, Matthieu Wiegman, Charley Toorop, Henri Le Fauconnier and many others.

The radical innovations of the Italian futurists, French Cubists and German expressionists in the first quarter of the 20th century were known to the Dutch. However, these innovations were only appropriated infrequently. Most Dutch artists tacked between tradition and innovation. The artworks from the museum’s collection of modern art reveal this duality. Artists such as Leo Gestel and Jan Sluijters experimented with different styles and sometimes painted expressionistically, and other times with a Cubist style. Physical reality – particularly that of their own surroundings – however remained central for almost all Dutch artists. They chiefly painted landscapes, the female figure, and still-lifes. These traditional subjects were the point of departure for experiments with colour, form and composition.

Although The Netherlands itself had no vanguard of radical innovators (with the exception of Piet Mondriaan), its liberal climate proved highly attractive for foreign artists. Particularly in the period around the First World War artists from Belgium and France came to The Netherlands. The Fleming Gustave de Smet and the Frenchman Henri Le Fauconnier settled in Bergen, in North Holland. The Flemish expressionism of De Smet and the Cubism of Le Fauconnier had great influence on Dutch artists like Gestel and Sluijters. Especially Le Fauconnier’s moderate Cubism was received with considerable enthusiasm. His art was a highly personal mixture of realism and Cubism. In that time this made him more successful in The Netherlands than his famed colleagues Picasso and Braque. 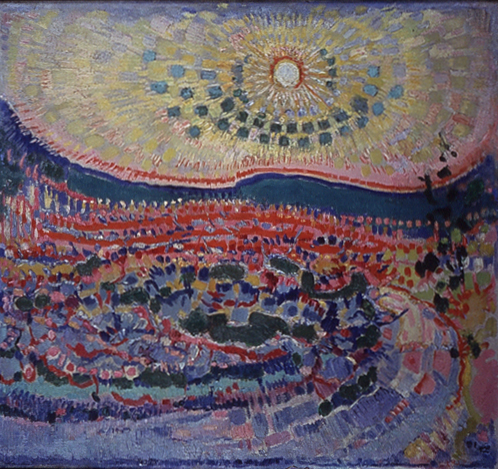